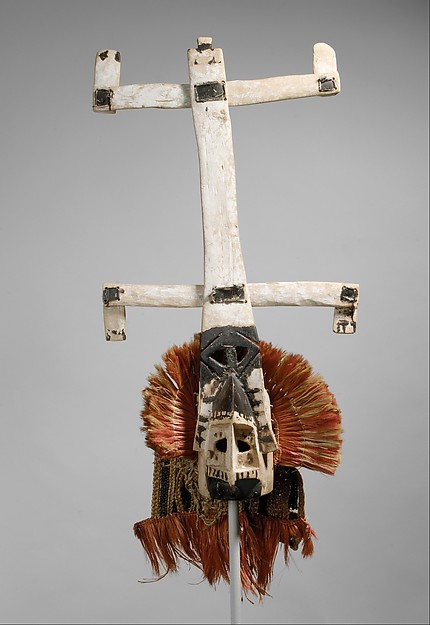 In Mali, West Africa, lives a tribe of people called the Dogon. The Dogon are believed to be of Egyptian decent and their astronomical lore goes back thousands of years to 3200 BC. According to their traditions, the star Sirius has a companion star which is invisible to the human eye. This companion star has a 50 year elliptical orbit around the visible Sirius and is extremely heavy. It also rotates on its axis.

This legend might be of little interest to anybody but the two French anthropologists, Marcel Griaule and Germain Dieterlen, who recorded it from four Dogon priests in the 1930’s. Of little interest except that it is exactly true. How did a people who lacked any kind of astronomical devices know so much about an invisible star? The star, which scientists call Sirius B, wasn’t even photographed until it was done by a large telescope in 1970.

The Dogon stories explain that also. According to their oral traditions, a race people from the Sirius system called the Nommos visited Earth thousands of years ago. The Nommos, according to the Dogon legend, lived on a planet that orbits another star in the Sirius system. They landed on Earth in an “ark” that made a spinning decent to the ground with great noise and wind. It was the Nommos that gave the Dogon the knowledge about Sirius B.

The legend goes on to say the Nommos also furnished the Dogon’s with some interesting information about our own solar system: That the planet Jupiter has four major moons, that Saturn has rings and that the planets orbit the sun. These were all facts discovered by Westerners only after Galileo invented the telescope.

The story of the Dogon and their legend was first brought to popular attention by Robert K.G. Temple in a book published in 1977 called The Sirius Mystery. Science writer Ian Ridpath and astronomer Carl Sagan made a reply to Temple’s book, suggesting that this modern knowledge about Sirius must have come from Westerners who discussed astronomy with the Dogon priests. The priests then included this new information into the older traditions. This, in turn, mislead the anthropologists.

That Kanaga symbol is actually a very strangely recurring symbol found all over the world. The image of Kanaga  is an archetype from the very ancient times. it is known  also  as squatter man. This symbol had been carved on rocks each facing north all over the world, including Armenia, Mexico, America, Venezuela , Italy, Spain, Saudi Arabia, Austria, China and the list goes on.

The Squatter Man (Squatting Man or Stick Man) petroglyphs are an image recorded by nearly all races on all the continents back in the day. One day the ancients were painting colour rock art and then, nearly literally, they were painting strange white shapes and figures. Every one started at the same time with the same images. Many are speculating that these races were either in contact with one another or they were all inspired by the same event which could be the most likely way of having seen it, if the event was in the sky.
These images were the same and so inspiring that they had to be recorded for the people of the future generation. 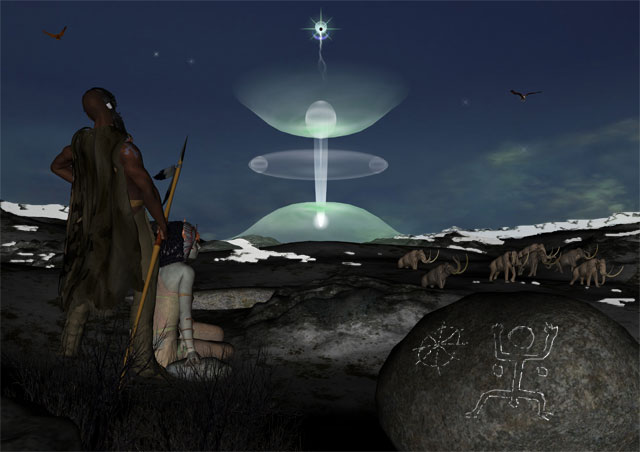 The Squatter Man petroglyphs were mapped with their GPS location, orientation and its type by a group of scientist and their findings of 100,000s of Squatter Man petroglyphs had been analysed and it was found that it pointed to a location in the southern sky, One of the most leading high energy Plasma Discharge research scientists in the world, Anthony Peratt recognised that the rock art or petroglyphs, geoglyphs and pictograms were the same as the result of what he had seen.

Thereafter he carried out an extensive field study on cave drawings as well as rock art, all around the world. His discoveries were that these petroglyphs were a recording of a high energy Plasma Discharge event which was seen in the Earth’s atmosphere that was witnessed by the ancient people at that time. 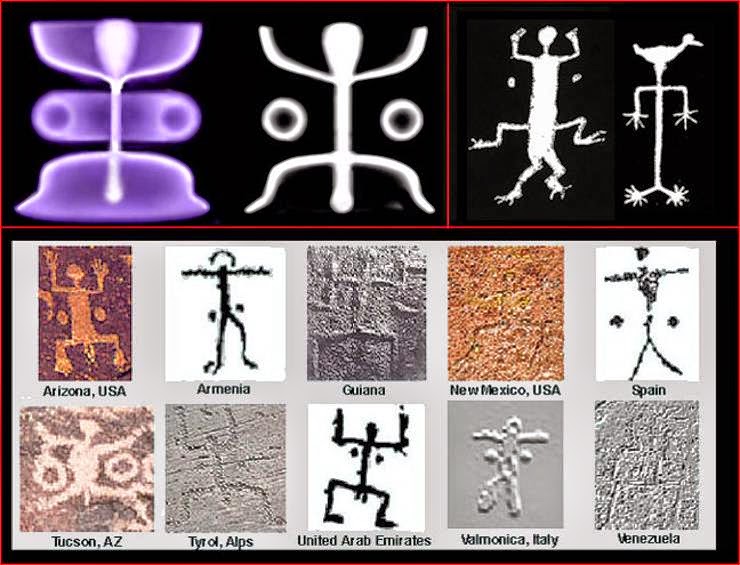 If one searches for the Squatter Man and Tree of life images from across the world, one would notice that everyone had seen them and these associated images had been carved into rock. It was noticed that rock art went from being colourful paintings of the world to suddenly white surreal images which were chipped and painted white or red line together with outline which seemed to have occurred often on a global event.

Besides, Peratt, Anthony van der Sluijs also investigated the Squatter Man images as well as the various other visual geometric patterns and both of them found that most of the rocks that were used for the petroglyphs had certain characteristics, with similar directions with mountain or hill ranges shielding those who created the rock art.

If the Squatter Man were of Plasma Discharge as seen in the heavens then there could be chances of Synchrotron Radiation release depending on the stage of the instability that would be harmful or even lethal to anyone who were exposed to it in the open space. Images of the Squatting Man as well as the Tree of life were also seen on the island of Malta which were carved and drawn on pottery as well as in limestone columns.